Kevin Doyle of Barrington to receive National Heritage Fellowship
from National Endowment for the Arts Award and Ceremony in Washington, DC

PROVIDENCE, RI June 24, 2014 - National Endowment for the Arts (NEA) Chairman Jane Chu announced today that Kevin Doyle of Barrington is among the latest recipients of the NEA National Heritage Fellowships, the nation's highest honors in the folk and traditional arts. Doyle, an Irish Step Dancer, is among a select group of artists and jazz musicians who are being honored for mastering the artistic skills and preserving the cultural traditions of their respective art forms.

Chu said, "Among these recipients of NEA National Heritage Fellowships there is a recurring theme. Starting at a young age, these individuals were exposed to the arts. Today these artists' passion for their art can be seen both in their long and dedicated careers and their willingness to share their knowledge with new audiences." 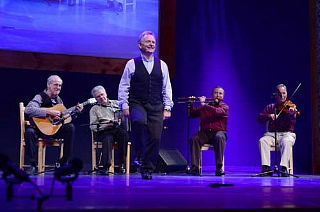 Kevin Doyle performing at 2013 National Heritage Concert in Washington, DC (photo by Tom Pich, provided by the National Endowment for the Arts)

Rhode Island Governor Lincoln D. Chafee praised Doyle for receiving this national honor. "On behalf of the citizens of Rhode Island, I congratulate Kevin Doyle for his recognition by the National Endowment for the Arts," Governor Chafee said. "As a retired RIPTA bus driver, he exemplifies the very best our state has to offer. His love for Irish Step Dancing and the arts is clear and should encourage others to pursue their passions."

U.S. Senator Jack Reed offered his congratulations. "I commend NEA for selecting Kevin Doyle to receive our nation's highest honor in the folk and traditional arts. Kevin is an elite artist with a common touch. He makes Irish step dancing look easy, but he is someone who has poured many years of hard work, sweat, and soul into honing his craft. I think it is great that he is being recognized on a national stage and making Rhode Island and our Irish-American community proud," said U.S. Senator Jack Reed, the Chairman of the Appropriations Subcommittee on the Interior, which oversees federal arts funding, including the NEA's annual budget.

U.S. Senator Whitehouse also praised Doyle and this award. "Our arts community makes Rhode Island a better place to live and do business," said Whitehouse, an ex-officio member of the National Council on the Arts, the advisory body of the National Endowment for the Arts. "Supporting the artists that make the Ocean State such a special place is a wise investment. I congratulate Kevin Doyle on this honor, and wish him the best of success as he continues his career."

Congressman David Cicilline, who represents Barrington in Congress, also applauded Kevin Doyle's achievement. "For decades, Kevin Doyle has pursued his passion for Irish Step Dancing and has shared with so many his talents and the traditions of his family and his Irish heritage, and I am delighted that the National Endowment for the Arts will honor that artistic dedication," said Congressman David Cicilline. "As a Barrington native, talented dancer and proud father, Kevin is an example to so many across our state, and I am excited to join in recognizing his accomplishment as a NEA National Heritage Fellow."

Randall Rosenbaum, Executive Director of the Rhode Island State Council on the Arts, added his congratulations. "We're thrilled that Kevin Doyle has received this important recognition of his work upholding and advancing the art of traditional Irish step dancing," said Rosenbaum. "We're pleased that the National Endowment for the Arts supports these important cultural efforts here in Rhode Island and throughout the country." 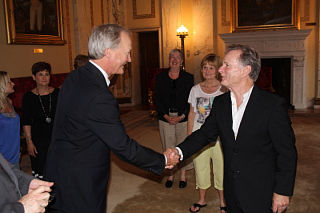 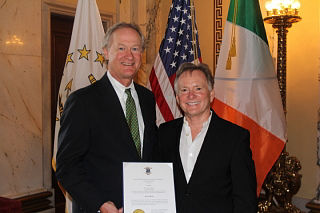 With more than five decades of Irish step dance under his feet, Rhode Island-born Kevin Doyle is a son of County Roscommon through his mother Margaret Taylor Doyle. He is a grandson of County Longford through his father John, whose Irish parents came to live in Providence, Rhode Island's Fox Point in the early 1900's.

At the age of eight, Doyle, along with his sister Maureen, began to learn their first Irish dance steps from their mother. He recalls his mother lilting (a way of vocalizing rhythmically using syllables rather than words) old tunes like "McLeod's Reel," which she had learned from her own mother in Ireland. In the 1960s, Doyle studied at the Pat Fallon School of Irish Dance with visiting Boston instructors Steve Carney and Mary Sullivan, and at the McCorry School of Dance in Pawtucket, where he learned steps traceable to the old dance masters of Ireland.

Doyle is retired from a career as a RIPTA bus driver.

The 2014 NEA National Heritage Fellows will be honored at an awards ceremony on Wednesday, September 17, 2014 and a concert at George Washington University's Lisner Auditorium on Friday, September 19, 2014. Both events will be open to the public and the concert will be streamed live at arts.gov. More information, including how to obtain free tickets to the concert, will be available later this summer.

About the National Endowment for the Arts

The National Endowment for the Arts was established by Congress in 1965 as an independent agency of the federal government. To date, the NEA has awarded more than $5 billion to support artistic excellence, creativity, and innovation for the benefit of individuals and communities. The NEA extends its work through partnerships with state arts agencies, local leaders, other federal agencies, and the philanthropic sector. To join the discussion on how art works, visit the NEA at arts.gov.

About the Rhode Island State Council on the Arts

In September 2014, Kevin was awarded a National Endowment for the Arts National Heritage Fellowship, the highest honor conferred upon a traditional artist in the United States. In the thirty year history of the Award, Kevin is only the third Irish step dancer to be so honored. His predecessors are Chicago's Michael Flatley and New York's Donny Golden. The impact of the Fellowship brought Kevin invitations to perform at the White House, in Ireland at the prestigious Willie Clancy Summer School, and at festivals in the United States. Doyle continues to perform and create new choreography. His dance, story, and music production Roscommon Soles is the most recent creative project and collaboration.

Beyond his love of Irish dance, there is no greater love in Doyle's life than his family. Kevin credits his wife Donna and his children, his parents, brothers, and sister… along with family still in Ireland, as the inspiration for his journey through dance, one step at a time.